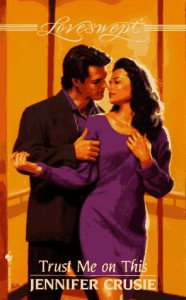 I was (am) home sick and wanted something to read that wouldn't take a whole lot of focus or mental energy, so when I found this on my Kindle, I thought it would fit the bill perfectly. I thought I had read all of Jennifer Crusie's back catalogue, but if I'd ever read this before, I didn't remember it at all. It's nowhere near her best work, but it was a quick read and entertaining enough. It's a mistaken-identity story: Alec is at a conference to catch a con man, and Dennie, a journalist, is there to interview one of the conference presenters. Alec sees Dennie talking to the con man in the hotel lobby (the con man is hitting on her, Dennie turns him down, but Alec doesn't hear their conversation), and assumes that Dennie is the con's accomplice. It's a pretty thin premise, and it probably would have been insufferably stupid in the hands of anyone but Crusie.