Let's be real: the All Souls trilogy is Twilight-spawn. 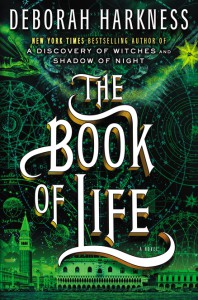 Slightly pretentious Twilight-spawn, actually, as if all of this highbrow attention to history and science and art could obscure the fact that we're still talking about two stories where an obscenely wealthy and dangerous old vamp falls in love with a mousy, not-very interesting human and their love is obsessive and forbidden, and over the course of the series Mousy Girl gets her groove back and becomes Queen of the Mary Sues, and when the couples breed the Powers That Be are disgusted and afraid of the unknown dangers that these rare forbidden vampire-hybrid babies represent, and vow to wipe out the whole Cullen/de Clermont clan.

That said, there's a reason Twilight made Stephanie Meyer rich, and there's a reason all of these books are bestsellers. Mock all you want, with good reason (and even Harkness mocks, when her vampires haughtily insist they don't sparkle), but the fact is, these books are entertaining. Twilight lets you shut off your brain and get carried away in the fantasy of forbidden attraction; All Souls takes you on the same journey without shutting off your brain.

I read A Discovery of Witches in February 2011, with no idea it was the start of a trilogy, and when I got to the cliffhanger ending, I was so gobsmacked it took me several days before I could sleep again. When Shadow of Night came out in 2012, I got an ARC copy and took a week's vacation so I could savor it properly. But since then, I've moved house, had a second baby, weathered a lot of changes at work, and I'm generally a lot busier, and so when the long-awaited final book in the All Souls Trilogy showed up on my Kindle, while I was excited to see it, I didn't have time to drop everything and devour it. Moreover, I didn't have time to re-read the first two books to refresh my memory, which in retrospect would have been very helpful. Consequently, I spent the first quarter of The Book of Life catching up on vaguely remembered details from the complicated world Harkness developed in the previous books.

The Book of Life picks up more or less where Shadow of Night leaves off: time-traveling supernatural power couple Diana Bishop (a witch) and Matthew Clairmont (a vampire) have returned to the present day from 1590, where Diana was learning how to use her rare spell-weaving powers from the more powerful witches of that age. (One of the overarching plot issues is that the magical world is weakening in the modern age: witches cast less effective spells, vampires are less able to make new vampires, and daemons are more prone to insanity than genius.) Diana is pregnant with twins, a secret which will get them in very hot water with the Congregation (the governing council of the magical creatures), because witches, daemons, and vampires aren't allowed to marry outside their own kind, much less reproduce.

Book of Life ties up the convoluted strands of the series-wide plot: the search for the ancient manuscript, Ashmole 782, that all of the creatures believe holds the key to their survival; the long-anticipated confrontation with the Congregation over Diana and Matthew's forbidden relationship; the explanation (and solution) to the problem of weakening magic. In reaching these conclusions, the book delves deeply into a lot of less central subplots: there is a lot of time devoted to the gordian knot of political and familial loyalties and obligations in the de Clermont vampire clan, a lot of time devoted to the analysis of genetic material in the pages from Ashmole 782 and DNA-testing of various magical creatures, and a lot of time devoted to traveling and describing the many settings of this book, including various locations in France, upstate New York, New Haven, London, New Orleans, Oxford, Venice, and Chelm, Poland.

The entire series has been plagued by pacing problems. Deborah Harkness's attention to detail is at once the series' greatest strength and also its greatest weakness. The extensive descriptions of places, people, history, furniture, art, and so on make the reader feel like s/he is right there in the story, but sometimes Harkness gives us more detail than we could possibly need. In A Discovery of Witches, the never-ending descriptions of Diana's clothes and meals made me crazy. In Shadow of Night, Harkness told us more about arcane alchemical processes than any reader (except perhaps a Ph.D. candidate) could possibly care to know. -And here in Book of Life, perhaps more than ever, the details get in the way of the story.

Let me explain: As the capstone of the trilogy, Book of Life is the climax the whole series (all 1800 pages of it) has been building to. The reader therefore has a sense of urgency in seeing how certain plots resolve that the detailed narrative often frustrates. Some examples: Matthew's mother, Ysabeau, gets held prisoner early on by the Congregation. Despite expressing some concern about it (and after learning why imprisonment might be especially traumatic to Ysabeau given her history), Matthew and Diana hie off to the States and spend several months gardening and cleaning the Bishop homestead in New York rather than working on a plan to free her. Later, they learn that the Book of Life's main villain is holding a witch hostage and repeatedly raping her, trying to breed with her. Matthew and Diana express horror and outrage... and then go to Yale and spend several more weeks futzing around in labs and libraries. Then, Diana has a pregnancy complication and gets put on bed rest while she and Matthew are on separate continents. Rather than rushing to her side, Matthew spends a week carving infant cradles. Later still, Matthew himself is a hostage of the Big Baddie, and Diana hurries to France... to feed her babies. Now, as a relatively new mom myself, I get that babies need to be fed, but surely not even the most hard-core breastfeeding enthusiasts would object to the sitter offering a little bit of formula so that Mom can go save Daddy from Mortal Peril.

The baby plot was almost as ridiculous and cringeworthy in Book of Life as it was in Breaking Dawn. The birthing scene was less horrifying, thank God, and the Bishop-de Clermont babies have reasonably normal names and growth patterns, but they still prefer blood to milk, and there's a ridiculous scene in which Diana tells her husband that their daughter is "not a vampire. She's a vampitch. Or a wimpire." (p. 424). Seriously?!

Book of Life has a point of view problem (as does Breaking Dawn, now that I think of it). Some of the book is written in first-person POV, as narrated by Diana. Some of the book is in third-person POV, usually limited to Matthew or other characters, but sometimes almost omniscient. Whatever rhyme or reason there may have been to the POV changes, I found them jarring and unnecessary.

One plot I wish the series had developed more fully (and I say that with some hesitation, when there were so many plots that could and maybe should have been pared down), is the issue of Diana's mortality. Unlike Twilight's Bella, Harkness's protagonist has no intention of becoming a vampire. That means this is a story of a timeless, all-consuming love between a woman who will live a mere handful of decades and a man who has already survived millennia. Perhaps the most empowering aspect of this love affair (especially contrasted with Twilight) is that both Diana and Matthew are happy with Diana the way she is, and don't wish to change her... but I still think they need to confront the issues raised by her mortality in a more meaningful way. At one point, Matthew tells Diana that his greatest wish is to grow old with her, which of course can't happen -- Diana's response is to conjure him a few grey hairs for Christmas, a wholly unsatisfactory answer to a real and pressing problem.

Reading over my review, it all sounds more negative than my actual reading experience reflects. I have a lot of nitpicky complaints, but overall, this book, and this series, is great entertainment. It's long and complicated and full of delicious (and sometimes maddening) detail, and the romance is compelling and the stakes are sky-high, and for a lot of people (including me) the All Souls trilogy is total reading catnip. I envy newcomers to the series who have the time to dive into all three books and read them in one epic 1,800 page binge, all at once, because I bet the story would be all the more transporting and satisfying that way, rather than interrupted by the long wait between book releases.