Refreshingly Sweet Paranormal Romance, But Watch Out For That Plot Twist (child-in-peril trigger) 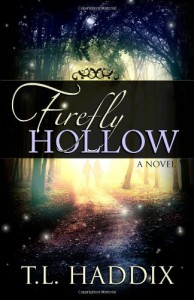 I don't read a lot of paranormal romance, but I think I'd read more, if more of it were like T.L. Haddix's Firefly Hollow. This relatively slow-moving, sweet romance between a lonely, reclusive young shape-shifter and the girl next door is all about the small-scale dramas of family dynamics and falling in love, and eschews the war-of-the-worlds style conflicts that seem to be such a staple of paranormal romance. Set in Appalachia in the 1950s and 1960s, Owen's and Sarah's romance had a nostalgic, old-timey tenderness to it that I really liked.

Owen Campbell inherited a recessive "shifter" gene from his mother's line, and in his teens began to shift into a deer or a wolf (depending mostly on his moods). This caused a rift with his father and brother, who were not shifters and rejected Owen as a potentially dangerous freak. Now, his family is gone, but Owen's fear of rejection remains, so he lives as a hermit on a mountaintop and only goes to town to visit the library (because he's a bookworm. *swoon*).

Sarah is Owen's neighbor. Unbeknownst to her, she had some early encounters with him in his deer and wolf forms when she was a teenager, but the first time she really meets him is at the library, where she gets a job after her father's death forces her to drop out of college.

Owen and Sarah are both kind, considerate, intelligent, and romantic, and I very much enjoyed their courtship, which seemed very slow and ritualized compared to my usual contemporary romance fare, where people pair off and leap into bed together shortly after meeting. Owen and Sarah have slow goodnight kisses under the porch light, with Sarah's mother waiting up inside. They get rootbeer floats at a drugstore lunch counter. They go to church and have family dinners afterwards. Though the dialogue occasionally seemed anachronistic, the story really does feel like what it is, a throwback to another era.

Perhaps because of the sweetness of the story, I was caught off-guard (and not in a good way) by a plot twist involving Sarah's sister. At the start of the story, Sarah's sister, Kathy, and Owen's brother, Harlan, are both just rotten people. They are so unpleasant that I found myself wondering if the author has some sort of traumatic relationship with her own sibling(s), because the conflict between Sarah and Kathy and Owen and Harlan goes well-beyond ordinary sibling rivalry. Also, Sarah and Owen are so nice that it just seemed strange that their siblings should hate them so much. By the end of the book, both Kathy and Harlan get their comeuppances, but in both cases the penalty is sooo much worse, and more irrevocable, then either sibling deserved. That's all I can say without getting too spoilery, except to say that if it had come any earlier in the story, or if I hadn't already been liking the book so well, Kathy's downfall would have been it for me -- T.L. Haddix crossed a line there, and my rating of this book dropped at least one star.