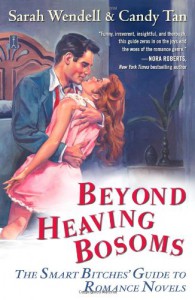 Smart Bitches, Trashy Books is one of my favorite blogs, and I'd been meaning to read this book for quite a while: I'm so glad I finally found the time. As usual, the Smart Bitches are profane and laugh-so-hard-your-drink-comes-out-your-nose funny, but more than that, they are smart, feminist, and right-on-the-money. Beyond Heaving Bosoms reviews the history of the romance genre, from "old skool" 1970s-80s era romance with its  "alphole" heroes (alpha/asshole) who invariably rape the heroine somewhere in the first 1/3rd of the story (and the Smart Bitches don't buy apologist attempts by other authors to explain those encounters as "aggressive seduction" or anything short of rape) to the more complex (but often just as schlocky) tropes and conventions of new skool romance, such as the notion of the "mighty wang" and "glittery hoo hoo" (i.e., the hero and/or heroine, or sometime both, have almost magical powers of sexual healing which can cure any possible ill and eventually resolve all plot conflicts). The chapter titles do a better job than I could of summarizing what this book is about, and the narrative tone:

Chapter Corset: An In-Depth Investigation of the Romance Heroine, Emphasis, Obviously, on "Depth"

Plus, as a bonus, the book includes plenty of recommendations of good reads and reads to avoid, and I've loaded up my Kindle with enough new books to get me through the rest of my baby leave.