Kids Think Farts are Funny. Moms, Not So Much. 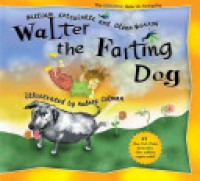 My Uncle Rob sent this to my boys as a gift. This is the same uncle whose favorite joke revolves around the phrase "Pull my finger." A bit to my dismay, Uncle Rob's brand of humor, including this book, is right up the average preschooler's alley.

Betty and Billy bring Walter home from the pound. At first they think he just needs a bath. Then they think he's just nervous. But no, it turns out he's just a farting dog. They take him to the vet. They change his diet. Nothing helps. Dad says Walter will have to go back to the pound, but then, amazingly, Walter's flatulence saves the day!

My three-year-old adores this book. He thinks it's uproariously funny. He would rate it a full five stars. He thinks about it long after we've finished reading, and always spends the next several days asking countless questions about Walter the farting dog, often at the most inopportune places and times... and that's why my rating is only three stars.