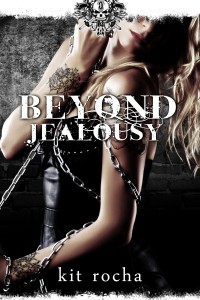 My fascination with Kit Rocha's Beyond series continues to boggle my mind, because it's so much of everything I don't like -- dystopian setting, patriarchal society, alpha males, submissive women, dangerous binge drinking, cage fighting, gang warfare, gratuitous violence -- and yet, something about the O'Kanes and Sector 4 is just so... yummy.

Beyond Jealousy is the much-anticipated fourth full-length novel in the series. The preceding books set up a romantic triangle between Rachel (exiled from her home and family because of her father's crimes), Ace (temperamental artist, tattoo genius, and former prostitute), and Cruz (elite warrior trained to be a hero at any personal cost). Rachel's been in love with Ace forever, but he broke her heart, so she took up with Cruz, but when that didn't work out, Cruz and Ace sorta-kinda took up with each other. Even though I've read all the books within the last year, the details of all that backstory get fuzzy with time.

Anyway, in Beyond Jealousy, the three of them try to see if a menage relationship can work where the various combinations of twosomes has not. Rachel and Cruz are game to give it a shot, but though Ace is all kinds of into the sex (and, hoo, boy, there's a lot of sex), he doesn't believe a long-term relationship can work because he's convinced eventually he'll do something to fuck it up, or Cruz and Rachel (both of whom he perceives to be more pure and deserving of happiness than he believes himself to be) will wake up to the fact that he's an asshole and cut him lose.

Ace's insecurities form the focus of the emotional conflict of this romance, and while I found his struggle sympathetic and compelling, I think the authors (Kit Rocha is actually a pen name of a writing duo) concentrate on Ace's emotional journey while giving Rachel and Cruz short shrift. Cruz struggles with the relationship a bit because his military training has drilled into him that fraternization with fellow soldiers is BAD, and Ace is not just a fellow O'Kane, he and Cruz fight side-by-side when called to enforce O'Kane law and order. There's a risk his personal feelings for Ace will cloud his judgment during combat, which in fact happens twice in the course of this story, and that conflict doesn't really get resolved in any meaningful way. Rachel's concerns and motivations are even less clear: maybe she's just a girl who likes more than her share of cock.

As I said, there's a lot of sex (a hallmark of this series), and it's hot but not necessarily new and different from anything I'd already seen in earlier books in the series. In fact, I'd say the sexy times in this book were diminished by the amount of time I spent squinting in confusion at my Kindle, trying to sort out of the pronouns in the polyamorous scenes. "He said" "His ____________ (body part)" "She writhed against him" = Who? What's happening? Honestly, sometimes it was a bit Abbott-and-Costello-ish, except instead of wondering "Who's on First?" I was trying to figure out Who's on Top?

The sex is a huge part of these books, but it's the world-building and the external conflict that makes the Beyond series so addicting. The external conflict in Beyond Jealousy centers around a group of bootleggers who are smuggling inferior booze with forged O'Kane labels, cutting into the O'Kane gang's profits and undermining their reputation and authority. Tracking down and stopping the operation is likely to case a war between the O'Kanes and the rival gang behind the smuggling, and Rachel's loyalties are torn because her father has ties to the smugglers. There's a cliffhanger ending, but since the person hanging from the edge of the cliff has been only a minor player so far, it's not the sort of cliffhanger that makes readers crazy (or at least not this reader).

Bottom line, this wasn't my favorite (I think I'd give that honor to Beyond Pain,  Six and Bren's story), but it was a solid installment in a fantastic series, and I'm looking forward to next autumn to find out what happens next! (Although this winter has been so brutal, when summer finally comes, I mean to savor it.)