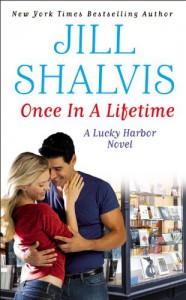 Jill Shalvis's Lucky Harbor books are like General Tso's Chicken. I don't go to Chinese restaurants very often because my wife can't have gluten or fish and most Asian sauces have wheat or fish sauce in them, but when I do have Chinese, I almost always order General Tso's Chicken.  Sometimes I think I should try something else off of the huge menu. Sometimes I even feel a twinge of regret when my order comes, that I've missed an opportunity to try something a little less boring. But mostly, General Tso's Chicken hits the spot. I don't have it often, and I crave it. I glance through the menu and consider that there might be other things I'd like better if I tried them, but I always come back to General Tso's because it is familiar, and comfortable, and usually just what I want.

So that's how Jill Shalvis is like General Tso's Chicken. Lucky Harbor might get a little cloying in its twee representation of the picture perfect small coastal town, it might sometimes even feel a little stale, but it's also familiar, and comfortable, and most of the time, these books hit the spot.

Aubrey is Lucky Harbor's Mean Girl. She is beautiful, but she has a reputation for being a bitch. Ben, by contrast, is the town's golden boy (or one of them: Lucky Harbor seems to have more than its fair share of Prodigal Sons). He married his high school sweetheart only to get his heart broken when she was killed by a drunk driver. In his grief, Ben went off to put his engineering skills to use installing water systems in dangerous third world countries, but he's back in Lucky Harbor for good, and the townsfolk fawn all over him in welcome.

The emotional spice comes from the fact that Aubrey's bitchy reputation is almost entirely undeserved. That girl has had a Raw Deal since childhood, and nobody gets it. Nobody understands her. She has lived in this town her whole life, working her ass off for every scrap of success, and she gets zero recognition for her efforts, just heaps of shit piled on her from every direction. She has every right to be bitter and bitchy, but she actually isn't: people just see her the way they've always seen her, which I found heartbreaking.

Ben's backstory brings some emotional spice, too, in that his grief for his late wife is palpable and honest, but though I found his story sympathetic, it didn't rip my guts out the way Aubrey's did.

My big complaint about this book is that even at the end of the story, when Ben finally got over his I'm-not-ready-to-love-again-because-REASONS baloney, he still didn't feel like Aubrey's champion. Aubrey has been very, very badly wronged by everyone -- her parents, her sister, her former teachers, her ex-boss, her ex-lover, the town gossips -- and she spends the whole book trying to make amends for her sins, while no one makes amends to her. As a reader, I was very frustrated by the one-sidedness of that. Aubrey deserves a champion. She doesn't need one, because she's tough and can stand on her own as she's been doing her whole life, but she deserves someone willing to stand up for her and spend his own considerable social capital telling the sanctimonious townsfolk of Lucky Harbor to fuck the hell off when it comes to all the bullshit they pile at Aubrey's door. Ben doesn't really do that. The wrongs don't get righted.

It's like that old joke about Chinese food. I liked Once in a Lifetime, I was happy with the happy ending... but within a few hours, as I thought about it, I wasn't fully satisfied. I'm still hungry.