The Continuum of Crazy There is a Continuum of Crazy, in Romance. Not enough crazy, and the book is likely taking itself too seriously. It's probably boring. Too much crazy, and the thinking reader won't be able to resist the urge to throw the book at the wall. The crazy continuum is a bell curve, and most good romance novels stay comfortably within the big dome at the middle of the bell. There's a sweet spot, though, right on very edge of the Too-Crazy end of the spectrum, where a few special, daring books camp up their crazy to delightful effect. These are the books you know are ridiculous and yet they're so much fun you love them anyway, the guilty pleasure, can't-believe-I'm-going-along-with-this-but-wheehoo!-what-a-ride! books, the Extra-Crispy-Crazy-with-Crazysauce fried confections of the genre.

I'm not sure Wicked Intentions falls in that sweet spot, but I think it was trying. I will give it points for effort. I can pick it apart, pointing out all the flaws and plot twists and tropes that didn't work for me (and I will, wait for it), but on the whole it was very readable and entertaining, and I can see why people enjoy reading Elizabeth Hoyt's historicals. I cared about the characters (even as I didn't like them much). I loved the atmospheric nature of the writing: a lot of historicals, especially wallpaper historicals like this, pay very little attention to setting; here, Hoyt doesn't seem to care much about historical accuracy but she can set a scene so that you, the reader, feel like you're right there in the room. It's very sexually explicit for a mainstream (non-erotica) historical romance, and I appreciated that Hoyt calls things by their proper names (Temperance has a clitoris, not a pearl or a bud or a glorious magic love-button). There are a lot of subplots and sequel-bait, and there is a LOT of Crazy.

This is the first of the Maiden Lane series, and I think I'll have to read further in the series before I decide whether these books are Extra-Crispy-Crazy (good) or if they've soaked up too much Crazysauce and gone soggy.

These books are set in the 1730s, almost a hundred years before the more familiar Regency Era, in the seedy St. Giles area of London. Temperance Dews (née Makepeace) and her brother, Winter, run an orphanage that is on the brink of financial ruin. The siblings are sober and devout, so much so that in the early chapters (before one gets to the aforementioned very explicit sexytimes), you might have the fleeting impression you've accidentally stumbled into an Inspie.

By contrast, Lazarus Huntington, Lord Caire (and we never find out what kind of Lord he is – he’s just a random aristocrat), is an unrepentant sinner known for his sexual deviance.

He likes to tie women up and blindfold them during sex. Maybe in the 1730s that was shocking, but to a modern reader, Caire's much-hyped kink (the early chapters are full of vague, titillating references to his depraved sexual appetites) seems disappointingly tame once it is ultimately revealed.

Caire feels mental and physical pain whenever anyone touches him (though he can initiate touch with others), for reasons that frankly don't make much sense when revealed.

His little sister died when she was five and he was ten, and hers was apparently the only touch ever that didn't hurt. Sure, dead sisters are sad and all, but with infant mortality rates in the 1700s being through the roof, Caire's reaction struck me as absurdly melodramatic.

He also claims to be incapable of emotion, including love.

Caire and Temperance strike a bargain that, again, does not make a whole lot of sense. Caire is searching for his mistress's murderer, and he needs a guide through the unfamiliar and dangerous streets of St. Giles. Temperance is the perfect choice--never mind that she's a woman out after dark on some of London's most dangerous streets, never mind that she doesn't know how to handle her pistol, never mind that Caire seems way more alert and street-savvy than she does--of course she's the perfect tour guide! In return for squiring him around town at night, Caire agrees to introduce Temperance around to other aristocrats, so that she can find a patron for her orphanage. Again, this makes perfect sense, except that despite his aristocracy, Caire shuns (and is shunned by) the kind of benevolent society types that might be interested in supporting an orphanage in the slums.

By this contrivance, Caire and Temperance start spending a lot of time together, and Caire wakens all of Temperance's long-repressed, shameful (to her) sexual impulses, while Temperance inspires in Caire all sorts of ooey-gooey Feelings he doesn't know what to do with. -And because he has the emotional maturity of a twelve-year-old boy, in timeworn, repressed-hero, Romancelandia tradition, Caire responds to these Feelings by being a jackass. He insults Temperance's dead husband and her devotion to him, cruelly and arrogantly hurting her just because it fascinates him to be able to manipulate and observe her emotional responses (since he doesn't have emotional responses of his own, remember).

Oh, wait, I'm forgetting a crucial bit of Crazy! Caire has long, silver hair, piercing blue eyes, and a silver walking stick that hides a sword. Couple all that with his drawling, arrogant voice and reputation for cruelty, and does all this sound familiar? 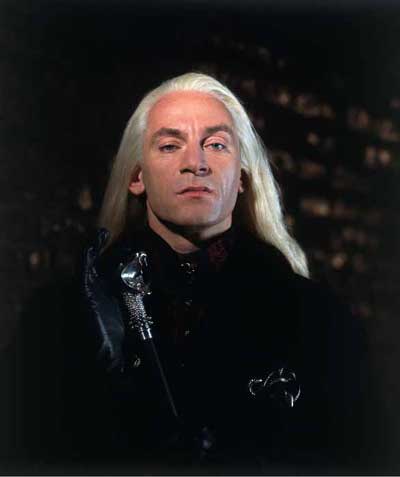 What? That's not sexy to you?!

Anyway, while Caire and Temperance are getting under each other's skin, there are several other subplots going on, which I can only assume must be sequel bait because they are left unresolved at the end of this story. Temperance's sister Silence gets ruined by an evil crime boss, only he doesn't really ruin her, only no one believes that she isn't ruined, so ruined she is. Temperance's brother Winter appears to be a kindly, mild-mannered, overworked schoolteacher, except that he sometimes comes home with knife wounds that he won't talk about. Caire's best friend St. John is slowly losing his beloved wife to some kind of wasting disease. One of the infant foundlings is also wasting away because she won't nurse, which breaks Temperance's heart though she tries to pretend she doesn't care. There's a crime-fighting vigilante that dresses in a harlequin mask stalking the nocturnal streets, known as the Ghost of St. Giles.

I was skeptical but willing to go along with the contrived premise of the story, all the weird subplots, and even Lucius' Caire's douchenozzlery (since I love a good redemption story), but there are a few flaws that I'm not ready to forgive. First, Caire's dark sexual appetites, which he characterizes as "needs" in an early conversation with St. John, seem to evaporate when he gets with Temperance. They play around with light bondage and then it seems to be out of their systems, as if they've outgrown it, or as if their love is so special that the kind of dirty, dirty deeds he's always needed to get his rocks off are no longer necessary. This bothers me because it's not how kink works: kink is not a dirty secret that can (or should) be repressed or outgrown when one finds the right partner. (In fact, if you've got a partner with whom you can't get your kink on, s/he's probably not the 'right' partner IMO.)

Second, this is not a good redemption story. Caire was hurtful and arrogant and manipulative of Temperance for the whole first half to two-thirds of the story, and then suddenly he decides he's in love with her and resents that she's using him for sex. (Which, A, she isn't, and B, is really hypocritical since that's exactly how he's used every woman he's ever been intimate with, up until Temperance.) He walks out on her (during a sex scene where she has put herself entirely at his physical and emotional mercy), and rather than writing him off as the absolute loser he is, or at least waiting for him to come grovelling back, Temperance apologizes to him. A well-done Grovel can be one of my favorite tropes in Romance, but I hate when the wrong person does the sucking up, and so Temperance's apology was a huge, huge turn off for me.

Finally, in the pivotal conclusion, a child is put in peril to lure Temperance and Caire into the murderer's path. As a mom, I hate child-in-peril plots. Even when everything turns out okay in the end, I feel resentful of what I consider a lazy attempt to inflate dramatic conflict by manipulating the reader's emotional sympathies.

Bottom line: I was disappointed by what I consider some major flaws in the story, but I'm intrigued enough by the series to keep going, in the hopes that Hoyt might turn all this Crazy into something good.