This Book Squicks Me Out 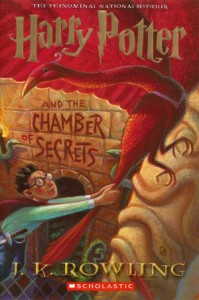 This is my least-favorite of the Harry Potter series. It's as entertaining as all the others, and it is actually really critically important to the series-long conflict with Voldemort, but I have a hard time reading it. In the past, when I've re-read the Potter books, I generally skip Chamber of Secrets. This time, reading it as part of Litchick's Epic Harry Potter Group Read, I struggled to stick with it.

My problems with it are entirely my own. In fact, my three-star rating probably isn't fair. At the very least, it's entirely subjective. See, I'm squicked out by snakes and spiders, both of which play a major role in this book, so that reading the last third of the book makes me a little ill... but a lot of other things in this book bother me too:

1. Professor Lockhart. Man, he sets my teeth on edge! He annoys the bejesus out of me, and even though I know he's supposed to and it's totally intentional on J.K. Rowling's part, he's so annoying that he detracts from my enjoyment of the book.

2. Moaning Myrtle. I feel so horrifically bad for her. I remember the misery of my own pre-teen years too well: the low self-esteem, the baffling changes hormones wrought on my complexion (and the rest of my body), the cruelty of school children, the lack of perspective to realize that life does get better... and poor Myrtle, who was more cruelly taunted and bullied in life than I ever was, is trapped in that hell for all eternity. Not just in that hated, awkward, pimply, pre-teen body, either: in that hated, awkward, pimply, pre-teen body trapped in a sewer!

3. Harry's Ostracism. In The Sorcerer's Stone, Harry learns he's famous, and he spends his first year at Hogwarts adjusting to a frantic level of notoriety that he's never asked for and never, in his opinion, done anything to earn. In his second year, however, his schoolmates turn on him, and his shunning--and the emotional turmoil he suffers as a result--is painful for me to read.

4. Hagrid was Framed! Sorcerer's Stone tells us that Hagrid was expelled in his third year, his wand snapped in half, and that he was only permitted to stay on as Gamekeeper because Dumbledore went to bat for him. In this book, we learn that Hagrid didn't do the thing for which he was punished, and Dumbledore knows it -- which makes Dumbledore's generosity seems a little bit shabby, at least in my opinion. (Yes, I know Dumbledore wasn't headmaster fifty years ago, but he is now and has been for some time: you'd think he'd have worked harder to clear Hagrid's name. Instead,

he stands by while Hagrid gets dragged off to Azkaban

At the same time, though, you have to read this book at least once because it's absolutely crucial to the series-wide plot. In fact, it might be more important than any other in the series, because it sets up so many of the building blocks that the later books are built upon. (They're all spoilery, obviously: click at your own risk.)

1. Harry speaks Parseltongue, and the implications of that. He is connected to Slytherin and Lord Voldemort in ways he doesn't understand, but that will become very, very important in later books.

2. Tom Riddle's Diary - The first horcrux. We don't learn until Book 6 (I think) what Horcruxes are, but the diary is the first of seven that Harry must destroy in order to defeat Lord Voldemort for good and all.

3. Ginny - She's eleven and she has a schoolgirl crush on Harry, but even though they're both too immature to act on it, her experience being possessed by Tom Riddle in this book makes her the only other person Harry's age with any first-hand understanding of the evil that is Lord Voldemort. Because of what happens in Chamber of Secrets, she understands even better than Harry's closest friends why fighting Voldemort is more important than school, more important than the Ministry, even worth risking Harry's very life. This connection is what eventually turns her schoolgirl crush into the kind of mature love that can sustain a life-long romance.

4. Ooh, here's one that's not too spoilery: Dobby. Dobby throws a lot of obstacles in Harry's path in this book, but in the long run, Dobby is a good elf to know.

Now, on to Prisoner of Azkaban: I can hardly wait!