Well-written Erotica, but Too Patriarchal for My Tastes 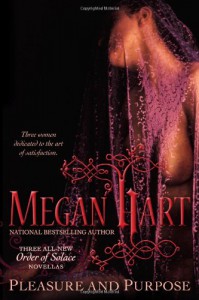 These three novellas are set in an alternate universe which is vaguely European and historical, but hard to pin down in time (they travel by train but may not have plumbing/electricity). The three stories are connected through the heroes, who are childhood friends, and the heroines, who are all handmaidens of the religious Order of Solace.

The mythology of the stories and the religious order is that there is a holy family who have been divided forever, and when they are reunited, all will be right with the world. The holy family will be reunited when the God Sinder's quiver of arrows is full, and every time a person achieves a state of Solace, Sinder gets another arrow in his quiver. The handmaidens of the Order of Solace have been trained to do whatever is necessary to provide solace to their patrons. In these stories (being erotica), this involves sex, but it doesn't have to (for example, one of the handmaiden's prior patrons was a dying woman who needed to find peace/solace before her death).

The first story involves Stillness and Edward. Edward has a tortured past which has made him suppress his inclination toward sexual domination. Stillness has a tortured past that makes her crave pain/being dominated. Can you guess how they find solace? This was my favorite story of the three.

The third story involve Determinata and Alaric. Alaric, a submissive, has been abandoned by his mistress and is lost in depression and drug addiction. Determinata (Mina) literally beats him into shape.

Though I liked the writing, which was definitely a cut above the norm, I was uncomfortable with the patriarchal structure of this imagined society and with the idea of the handmaidens, who are essentially shipped off to each patron like mail order brides (though they're not actually supposed to stay with the patrons after the patron achieves Solace) whose entire purpose (or Pleasure and Purpose, after the title) is to serve their men. Reading these stories, I wasn't ever sucked into the fantasy enough to silence the feminist voice in my head (picture a tiny, cranky, Rosie-the-Riveter perched on my shoulder, whispering in my ear like the angel/devil characters one often sees in cartoons) which found this premise very uncomfortable, even distasteful.