Adventures in the Ridiculous 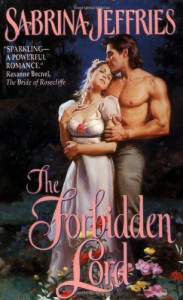 This book starts with mistaken identity: Emily mistakes Jordan, Earl of Blackmore, for her cousin and escort, because both Jordan and the cousin have red hair and are wearing masquerade masks. Jordan mistakes Emily for a lonely widow, since she is in black mourning for her mother. Only when they are alone in a carriage, Emily's reputation already in danger, do they discover the error.

Sometime later, a neighboring lord who controls her father's living and knows a nasty secret about Emily forces her to go to London and pose as the flirtatious Lady Emma. This is a ruse to flush out the blackguard who attempted to elope with the lord's daughter. Emily, who hates lying, doesn't want to go along but is blackmailed into cooperating because of the aforementioned nasty secret.

Emily's/Emma's masquerade is going smoothly until Jordan figures out that "it's the same dame." (Luckily, it doesn't take him too long, otherwise his intelligence would be in serious doubt.) Then she has to try to convince/bribe him to keep her secret, because if he exposes her the dastardly lord will expose the dangerous secret and Emily will suffer a fate worse than ruin.

I didn't really buy into the premise (Emily and everyone else being willing to go along with Lord Evil's plot, nor Emily's success at the masquerade). Also, I'm bored with the hero-totally-luuuuurves-her-but-won't-admit-it-because-his-troubled-childhood-soured-him-on-love trope, especially where it goes along with the we-can-sleep-together-without-regard-for-my-reputation-or-pregnancy-but-I-cant-marry-you-until-you-tell-me-you-luuuuurve-me trope. Whatever. So, this plot was pretty Meh, but it's fairly well written, and since I'm apparently compulsively unable to leave a series unfinished (unless it flat-out sucks toads), it wasn't a waste of time.