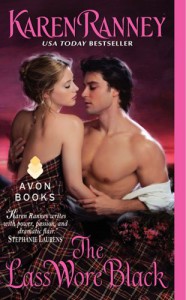 There is much about this book that I really, really liked:

1. The gender-flip of the "scarred hero" trope. Catriona has been scarred/disfigured in a terrible carriage accident and now must learn how to get along without beauty, which had been her defining feature. Physical allure is more important to women then men, beauty more critical to women's identity and social value, so it was a thought-provoking reversal of a fairly standard plot device.

2. Catriona was not a virgin. More than the loss of her beauty, she mourned the loss of passion and feared no man would ever want to be intimate with her. I found it refreshing that she recognized that she'd been bad by society's standards, but knew that if she'd followed the rules, she would never have known sexual fulfillment. A sexually-liberated heroine is a rare treat in historical romance.

3. A really, chillingly evil villain. I'm not usually a fan of murder-mystery subplots in romance novels, but this wasn't a mystery: the reader knows from the start who the bad guy is, and the scenes written from his perspective are gut-churningly dark.

4. Secondary characters, like Mark's grandfather and his housekeeper, were really unique and interesting. Often characters like these fade into the background; I appreciate that here, even minor characters were vividly drawn.

Other things about this book I didn't enjoy so much:

1. The pacing of the plot and flow of the dialogue was choppy/uneven. Parts of this book dragged, and parts went so fast they were hard to follow. A few times I had to re-read a few pages because I lost the flow of the narrative. Sometimes dialogue didn't make sense. This story is unique enough that I think if someone else had written it, I'd give it five stars, but I found Ms. Ranney's narrative style clunky and unwieldy.

2. Neither hero nor heroine were very likeable. Mark is busy, self-righteous, judgmental, and kind of self-absorbed. At the start of the novel, he is betrothed to another young woman, Anne. Though he has not formally declared his intention to marry her, he knows his behavior, public and private, has given the impression that they have an understanding. When he begins to fall for Catriona, he blows off the blameless Anne with a brutal lack of delicacy, tact, or remorse.

3. Catriona is selfish and vain, though given her injuries and physical and emotional pain, her self-pity is understandable, if tedious to read. More than Mark, she exhibits substantial character growth over the course of the novel.