Romance With an Unfortunate Side of Slut-Shaming 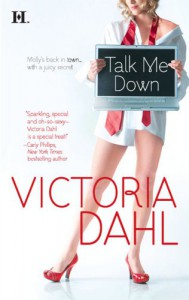 In Talk Me Down, Molly Jennings returns to Tumble Creek, her childhood home, after inheriting a house. She is fleeing a stalking ex-boyfriend, a police officer specializing in hostage negotiations, who uses his skill and training at manipulating hostages to manipulate her and everyone who would be close to her. Given that background, I would have expected her to be a little more wary of taking up with another officer, but she and Ben have a history: she's lusted after him since high school, when he was her brother's roommate. Back then, she interrupted him in flagrante delicto with another woman, which sparked her attraction and her career, inspiring her first (far too autobiographical) published erotica. She lives in fear not just of the stalker ex, but also that someone will recognize Ben from that first story and unmask her profession, which she has kept secret even from her family.

Ben has clawed his way back to respectability after his father, a high school principal, shamed the family by sleeping with a student just a year older than Ben. Now grown, he is the Chief of Tumble Creek's small police force, but he is still so afraid of being tarnished by scandal that he only dates women from out of town. He flatly refuses to date Molly until she will tell him what she does for a living, and in the meantime he imagines all sorts of scandalous possibilities: stripper, prostitute, phone sex operator, online sex chatroom moderator. Luckily, despite his vow not to date, he doesn't seem to help the urge to go to bed with her, and they're well on the way to happily ever after when Molly's secrets catch up with her.

Molly's eventual unmasking was, to me, overhyped. After all, she isn't a true "bad" girl, despite her saucy career: she lost her virginity at seventeen and hasn't had a boyfriend (except the stalker) in years. There is the predictable confusion about whether she's really into all the kinky stuff she writes about, and she suffers some slut-shaming at the hands of more narrow-minded characters, but it would have been a more interesting conflict if Molly really were the "slut" she fears being labeled: perhaps a dominatrix, a reformed stripper or sex worker, or even just a girl who everyone knows got around back in the day (like Jane from Lead Me On).

A word of caution (and I reveal what may be a spoiler because I think some readers may appreciate a trigger warning): The stalker ex does come back, and in doing so puts Molly in a situation that may be difficult to read, especially for those with a personal history of sexual and/or domestic abuse.