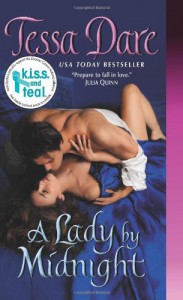 I have like all of Tessa Dare's Spindle Cove books so far, and I enjoyed this one, too, but not as well as the previous two. Kate is an endearing heroine; despite a childhood of deprivation in an orphanage, and despite her fears that she will never find love or family because of her lack of social standing and especially because of the prominent wine-colored birthmark on her face which she believes makes her unattractive, she is generally plucky, self-sufficient, and of a sunny disposition. Thorne, the leader of the local militia, is not so accessible: his own tormented past and the horrors of war have left him cold, emotionally stunted, and a little bit damaged. For much of the book, he is openly cruel and cutting to Kate in his determination to keep himself aloof. (The reader knows he only behaves so unfeelingly because he loves her and wants what's best for her, and he is not it, but this particular reader did not believe the ends justified the means.)

Just as Kate is reminded by a former schoolmarm that she is 'marked by shame' (a reference to her birthmark?) and will never be wanted by family or by a lover, suddenly (that very day, gasp!) the unconventional Gramercy siblings** arrive in Spindle Cove prepared to claim her as long lost kin, and, not trusting them and needing to have standing to protect her, Thorne announces that he and Kate are betrothed. Viola: instant family and lover!

Of course, it's nowhere near that easy, and the twists of fate and the misunderstandings that act as obstacles to Happy Ever After are entertaining but not especially believable. I personally didn't really enjoy the ending (To quote a cheesy movie from my adolescence, The Cutting Edge, "Naked male insecurity really leaves me cold"), but Tessa Dare's dialogue is always snappy (even if sometimes distractingly anachronistic), and her writing always sweeps me away, even if up on later reflection I am a bit more jaded.

**SPOILER (sort of, only very tangentially):

One of the Gramercy siblings, Harry, is a lesbian who wears trousers and has chosen her childhood governess as life partner. While it is totally ridiculous that her family would treat this with as much equanimity as they apparently did (particularly when the truth of Kate's past, when it is revealed, is so offensive to the leader of the Gramercy clan, brother Evan), as a lesbian myself, I would luuuuuuurrrrvve for Dare to write a sequel/prequel telling Harry's story. I'm not going to hold my breath--Evan is the sibling who most screams "Sequel Bait!", and I don't know whether the more mainstream romance readers would go for that--but oh, it could be so much fun.