My very first Nora Roberts, if you can believe it... 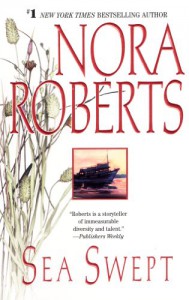 This is the first of the Chesapeake Bay series, focusing on Cameron, the oldest of the four Quinn 'brothers' (four troubled young men adopted off the streets and raised as brothers). The Quinns are reeling from their father's inexplicable death in a single car accident which might not have been an accident. The three oldest brothers, fully grown, make a deathbed promise to their father to take care of their youngest brother, Seth. Seth is ten and his adoption into the Quinn family had not been finalized at the patriarch's death, which leaves his guardianship uncertain.

Enter Anna, a caseworker from Social Services assigned to investigate Seth's placement with the Quinns. Now, I found it HUGELY unlikely that a social worker would get romantically involved with a client and not recuse herself from the case, and when her dual role as caseworker and lover made for plot conflict later, I just rolled my eyes because, seriously, who didn't see that coming? I also was annoyed by the casual violence in the relationships in the book: the brothers are always getting into fistfights, and Cameron and Anna get into several physical fights, too. No one gets seriously hurt, but it bothered me. (I work in the domestic violence field, so my tolerance for relationship violence in fiction--as in life--is really low.)

I did like the relationship between the brothers, and I loved that Anna is saucy and sexually liberated, despite a sexually traumatic past, even before she meets Cam. Ooh, also: this book has sailboats, and I'm a total sucker for boats.