"Elements of Chemistry," by Penny Reid This book is an unfortunate victim of bad timing. When Penny Reid opted to name her arrogant, billionaire venture capitalist protagonist Martin Sandeke, I'm sure she had no idea who arrogant, millionaire venture capitalist jackhole Martin Shkreli was. Yet by the time time I read it, Martin Shkreli had launched himself into infamy by price gauging AIDS patients and being indicted for securities fraud. It didn't help that Elements of Chemistry's Martin is repeatedly called "Jerk Face" by the book's heroine and described as having a "jerk smirk." Therefore, every time I read Martin Sandeke's name, this is what I pictured: 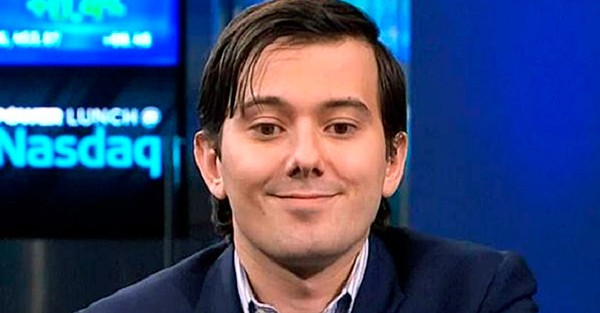 Not so sexy, right? And even though Martin Sandeke is described multiple times as blue eyed and "truly a magnificent specimen" of manhood, insanely fit because he's a rower, I just couldn't shake the image, which really, really made it hard to root for Martin's happy ending.

Setting that aside, I really like Penny Reid's humor and her unabashedly smart, often geeky protagonists. Elements of Chemistry employed the witty, laugh-out-loud funny banter I so enjoy in Reid's work, and I got caught up in the romance in the first two parts of this book. I loved that, despite her inexperience, heroine Kaitlyn always knows what she wants and how to advocate for herself, and her no-nonsense honesty is so refreshing. I love her relationship with her best girl friend, Sam, who is a fully-drawn character in her own right and not just there to decorate the plot.

But Elements of Chemistry is also a good example of why I don't usually read New Adult. The tropes are just so tired. Who knew there were so many tormented billionaire bad boys with dysfunctional childhoods in the college dating pool? I do not understand the literary appeal of the billionaire bad boy. Spoiled, entitled children are about as sexy as, well, this guy:

(* Exception: Courtney Milan's Trade Me does a pretty good job of turning the billionaire trope on its ear. )

Then there's the fact that New Adult protagonists are usually total Mary Sue's and Gary Stu's, and this book is no exception. Kaitlyn is drop dead gorgeous but she doesn't know it until her roommate introduces her to the magical concept of eyebrow shaping. Her mom's a senator and her dad's a medical dean and her grandparents were nuclear physicists, and poor Katy struggles because she likes science but she isn't a prodigy until, she sits down at Martin's piano and whoops! Turns out she's a musical prodigy who just picked the wrong major. Martin is not just a rower -- he's the youngest, fastest, bestest collegiate rower ever. He's not just heir to a multi-billion dollar communications empire; he's also an inventor and an entrepreneur in his own right, holding several patents before he even graduates from high school. While I can see a certain escapist fantasy appeal in such perfect characters, I think their perfection detracts from the story. I'd rather read about characters I can relate to, who struggle through adversity or have real, immutable flaws, as we all do.

The worst flaw of Elements of Chemistry is the way it falls apart in the third part of the book. Kaitlyn and Martin have broken up and gone separate ways, and after eight months their paths cross and they decide to try to be friends. Obviously, the reader knows this is stupid, but despite their Mary Sue/Gary Stu brilliance, the protagonists descend into more than a hundred pages of being Too Stupid to Live. It is especially frustrating because Katy and Martin's communications had always been so forthright and honest up to that point, and to find them still trying to be honest but stupidly missing each other again and again was just maddening.

Even with its many flaws, though, this was a quick and entertaining read. I don't regret the time or money I spent on it, and I will definitely read more of Penny Reid in the future!