"Crash into You" by Katie McGarry 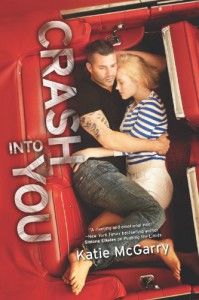 My full-on glom of this YA series continues. This third installment focuses on Isaiah, who is about to age out of the foster care system. (Readers of prior books in the series will know Isaiah as the best friend of book one's hero, Noah, and the boy who was in unrequited love with book two's heroine, Beth.) Needing to come up with rent money, Isaiah enters his Mustang in an illegal street race, where he meets Rachel. Rachel is the precious daughter of one of Louisville's most privileged families, but when she can sneak out from under the parents' and brothers' overprotective thumbs, she likes to race. She winds up at the street race more or less by accident, because Plot.

When things at the race go sideways, Rachel and Isaiah end up indebted to a scary crime boss who will hurt/rape/kill them if they don't pay him back. (Also because Plot.) This makes them unlikely allies, who eventually become unlikely lovers. (Well, unlikely heavy petters, anyway -- this is YA.)

I was fond enough of Isaiah from the previous books to be excited to read his story, and mostly this didn't disappoint, though this whole series is a little angsty for my tastes. (Again, it is YA.) I thought Rachel's backstory was interesting and well done. (There are only so many ways you can make a "poor little rich girl" a sympathetic figure, and McGarry did well in taking an unexpected route.)

I really disliked the ending, which was abrupt and rather of the deus ex machina variety, but otherwise this book was fun. On to the next!