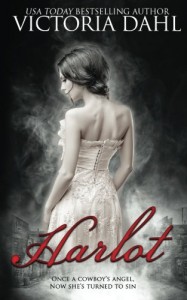 Yesterday, I read the prequel novella to this book, Angel. It was free, and in my brief review, I said that it had done it's job: I intended to read on in the series. Harlot is the next installment, and it was a fast read, and a not entirely satisfying one. At 123 pages, it's longer than a novella but not by much, and I think the brevity was part of my disappointment: there was not a lot of room for character development or anything but a pretty basic story arc.

Harlot is set in the American West (Colorado) in 1875. Caleb loved Jessica, the town doctor's daughter, his whole life, but he felt he had to make something of himself before he could offer for her, so he went to California for two years to seek his fortune in the gold rush. He came home having done so, only to find that in his absence, Jessica became the town harlot. Furious, Caleb offered her $25 to be his whore for the week.

Of course, it's clear to the reader from the start that Jessica only did what she did out of desperation, so Caleb's fury -- especially since he didn't keep himself pure in California, either -- is pretty offensive. Toward the end of the story, Jess finally points out this hypocrisy, and to his credit, Caleb gets what an ass he's been and makes a pretty good grovel, but I found it very tough to get in his corner until then.

I've noticed in reading Victoria Dahl's contemporary romances that her sex scenes are often not my cuppa, and that was true here as well. A lot of Dahl's stories, as here, cater to a humiliation kink -- where the man calls the woman "slut" and other offensive names, and does things with the express intent of degrading her, and she gets off on it. I understand that that turns some peoples' crank, but to me it's like a dousing in ice water: it totally pulls me out of the scene and turns me off. So, I didn't like the smexy parts much.

I was also disappointed by where Angel's protagonists, Bill and Melisande, end up. They are still together and in love, but I hoped for a happier happy ending for them.

In the end, this book didn't totally work for me, but if, like me, romances with prostitute protagonists are your catnip, or if you enjoy a good grovel, you might want to check Harlot out anyway.