I'm a Sucker for a Virgin Hero 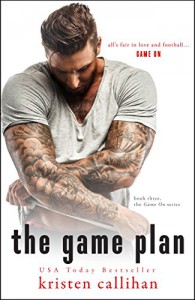 The description of this book -- virgin hero, sexually liberated heroine, sensitive man-bun-wearing beta hero in an alpha career (pro football player) -- was totally my catnip, and I was not disappointed. I really, really enjoyed this book (enough to glom the rest of the series within the next few days) while I was in the midst of it, and I still like it a lot even though, now that my rose-colored reading glasses are off, I can recognize that it has some serious problems.

Ethan Dexter, "Dex", is a 24-year-old virgin. How does that happen, exactly? I don't fully believe it, but I went with it for purposes of the story: first, he was a chubby late bloomer in high school (though, I know plenty of chubby late bloomers who managed to get laid in high school, even without the panache of being on the football team), and then he had an ugly (but not entirely believable) near-sex experience that put him off casual sex for good.

He has long had a crush on his buddy Gray's wife's little sister, Fiona. Fiona is a sassy, sexy, sophisticated spitfire who has very few sexual hangups. I'm pretty bored with the manwhore-tamed-by-virtuous-lady trope, but I enjoyed this gender flip of it. I liked that Dex was a virgin but that he wasn't repressed or naive in the way that most virginal heroines are.

Apart from Dex's over-ripe virginity, the main conflict in the story stems from the fact that Fiona lives in New York and Dex lives in New Orleans. I found the struggle with the long-distance relationship to be believable, if a little too easy for real life (distance is less of an issue when both parties in a relationship have tons of money, I guess).

My issues with the book stem from the subplots. First, Fiona has a rival at work who steals her ideas and gets credit from the boss. I suppose we've all known someone like this, so it was believable, but I'm never entertained by storylines that turn women into one-dimensional villains, which this subplot did. Second, Fiona and Dex take sexy photos of one another, and those photos get out, and as always happens, Fiona is the one to bear the brunt of the public scandal. Dex is mostly pretty stand-up about that, until, suddenly, he isn't. Again, I found that plot twist believable but disappointing: I just wish the book hadn't gone there.