Fool Me Twice, Shame on Me. 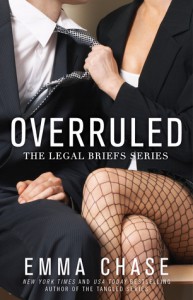 I have no one to blame for this but myself. I hated Emma Chase's Tangled (see my rage-review here), and so I just should have known that whatever Chase is selling, I don't want to buy. However, being a criminal lawyer myself, I'm kind of a sucker for romances involving prosecutors/defense attorneys (although, note to self, I rarely actually like these books as I find the legal plots rarely ring true), so I stupidly decided to check out this new series. Reading the blurb should have been all it took to warn me that this book would not be for me: Defense attorney Stanton Shaw takes his big city, Latina f*ckbuddy back home to Hicksville, Mississippi, to try to break up the wedding of his high school sweetheart.

As I should have expected, stereotypes abound.

Also as I should have anticipated (because Drew of Tangled was such a douchenozzle, and because the blurb basically tells us that Stanton brings his hoochie mama with him on a mission to win back his baby mama), the "hero" of Overruled was a total jackhole. What isn't clear from the blurb is that Jenny, the high school sweetheart, is not Stanton's ex -- he got her knocked up in high school, and they agreed that he would go to college and support his family, and that while they're apart they can have an "open" relationship. This has gone on for ten years, with Stanton catting around like a manwhore with anyone he likes, and paying only occasional booty calls on Jenny. This works fine for him, until Jenny falls in love with someone else, which Stanton gets all butthurt and betrayed about.

I didn't mind Jenny, but Sofia (the hoochie mama) was kind of a doormat. Like Stanton, she's supposed to be this brilliant lawyer, except that we never see her doing any actual lawyering. She spends the whole book talking about how she knows men because she's got three brothers, and she knows men don't like commitment or clingy women, so she's not going to make any demands on Stanton. That's all well and good, but have a little self-respect, please! No woman with any self-esteem or sanity would willingly accompany the guy they're sleeping with to help him win back someone else. Sofia keeps setting limits--I'll go with you, but no sex. Okay, once we get to Mississippi, no sex. Okay, absolutely no sex while we're staying with your parents--and then ignoring those limits, so she just came across as weak and ineffectual.

Stanton eventually sees the error of his ways and tries to make things right with both Jenny and Sofia, and readers who enjoy a good redemption story may be satisfied here. As for me, I solemnly vow: NO MORE EMMA CHASE FOR ME!