Too Tangled in Guilt to Talk Things Through 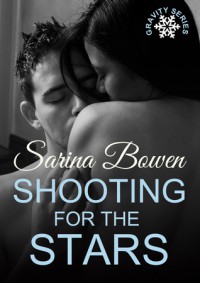 This third entry in Sarina Bowen's Gravity series is more a companion to book two, Falling from the Sky, than a sequel to it. Falling from the Sky was about champion snowboarder Hank Lazarus's recovery from a spinal injury that cost him the use of his legs, and his romance with his doctor, Hallie Anders. Shooting for the Stars tells the story of Hank's sister, Stella, and his best friend, Bear, who are sharing a post-coital hot tub when the call comes about Hank's fall. The timing could not be worse, and Stella's and Bear's guilt and grief for Hank get all tangled up in their guilt over their illicit one-night stand, and for most of the book, the two of them are too emotionally twisted up to talk to each other. The conflict is heartfelt and well written, but I didn't love this book because, as understandable as their separation is, I was frustrated (as I usually am) by plot conflict stemming from the protagonists' failure to talk to each other. Bear and Stella kept missing each other, even when they did try to talk, mostly because Bear can just be an emotionally stunted blockhead.

Still, it was a quick, entertaining read, and I liked it even if it's not my favorite Sarina Bowen to date.