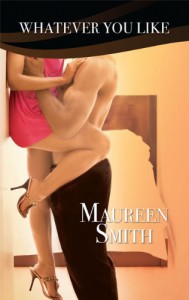 I picked this up because I was intrigued by the recent review at Smart Bitches, Trashy Books, because I have a weakness for the escort/courtesan/prostitute as protagonist trope, and because it was on sale. After starting it, I was briefly even more intrigued to learn the protagonists are African American (which you'd never know from the pasty pale headless couple on the book cover).

Alas, even with all that intrigue, this was not for me. On their first date, Lena lays the ground rules: she is paid for companionship, not sex. Roderick ignores this, corners her in an alcove, fondles her, and then has dubiously-consensual sex with her in the limo while bringing her home.

She says that was a mistake and she doesn't want to see him again. Two weeks later, he shows up at her day job (not the escort job that the day job supervisors obviously don't know about, and by this point the reader knows she works two jobs because she's supporting an elderly grandparent and her layabout little sister, as well as herself) having already ingratiated himself with her boss. He takes her to lunch, and basically tells her he'll give her employer (not even her personally!) a half million dollars if she agrees to be his sex slave for for three weeks. If she says no, no deal, and what is she supposed to tell her boss?

I don't know what Lena did when faced with this dilemma (though I can guess), because that was where I call foul.

Whatever You Like buys into the fallacy famously presented by Fifty Shades and its ilk that stalking and sexual coercion is okay, sexy even, if the man doing it is a handsome billionaire. There's a meme making the social media rounds:

I work with domestic and sexual violence victims, and this kind of behavior is not sexy no matter who does it, and life is too short to read this crap for "entertainment."