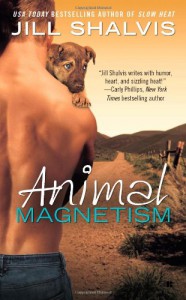 I really enjoyed this first book in Jill Shalvis' Animal Magnetism series. Like her better known Lucky Harbor series, these are small town contemporary romances full of appealing characters, snappy dialogue, fast-paced plots. Animal Magnetism is set in Sunshine, Idaho, which is a less touristy, white-picket-fency kind of place than Lucky Harbor, Washington (a good change, in my opinion).

Lilah runs an animal kennel and shelter. She's alone in the world after the death of the grandmother that raised her, but she has very good friends, including her ex-boyfriend and business partner, Cruz, and Adam and Dell, the veterinarians who run the animal center next door. Adam and Dell are brothers who invite Brady, who was their foster brother when they were teens, back to town to help them fix up an old helicopter which they intend to use for search and rescue calls and veterinary visits to Idaho's remote mountain ranches.

Brady and Lilah have instant, and believable, chemistry, but for the first part of the book they're at cross purposes because Brady doesn't plan to stick around once the helicopter is ready, and even though Lilah says she knows that and is only looking for a fling, he sees her life in the house where she grew up, working in the town where she grew up, still good friends with her few exes, and thinks that whatever she may say, nothing about Lilah is temporary. Plus, there's the fact that Adam and Dell consider Lilah an honorary little sister, and much as they love Brady, they don't take kindly to the idea that he'd mess around with her.

As time goes on, however, Brady comes to find that maybe putting down roots and making a home somewhere is not such a bad idea. It's not only his growing feelings for Lilah that change his mind, but also his brotherly affection for Dell and Adam, his respect for their business and the fact that there's a place for him in it. Also, he takes in a stray dog, an arrangement that was also supposed to be temporary, but soon comes to realize he doesn't want to give the puppy up. From there, it's only a short leap to realize he doesn't want to give Lilah and his foster brothers up, either, which paves the way for Happily Ever After.

I love blue collar heroes and heroines, and books that handle class issues in a way that is believable and empathetic without exploiting a character's poverty for tragic effect, and I really enjoyed that aspect of this book. Lilah, Dell, Brady, and Adam all grew up poor, and Lilah still struggles every month to juggle her bills and keep her house in reasonably good repair, but that's just a fact of life. It's not a source of sympathy or plot conflict, and there's no billionaire here to bail her out. Instead, she's using her smarts and her own hard work to build a successful business, with the help of friends, and maybe she'll succeed and maybe she won't -- and that, too, is just a fact of life.