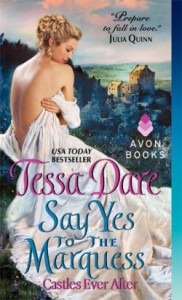 I've been in a slump when it comes to historical romance lately, so I was pleased enough to like this, even if it didn't knock my socks off. Say Yes to the Marquess is a solid effort by Tessa Dare, significantly better than Romancing the Duke (the first book in the Castles Ever After series). Clio Whitmore has spent eight years waiting for her betrothed, Piers Brandon, the Marquess of Something, to return from helling around on the continent and make an honest woman of her. Their marriage has been delayed so long that Clio has become a laughing stock within the ton, earning the nickname "Miss Wait-More." Speculation runs rampant that Piers no longer desires the union, and the truth is that Clio herself has had second thoughts.

Eight years of training to be the perfect wife to a lord has given Clio the skills to be independent, and when she inherits a castle, she has the means as well. She visits Piers' brother Rafe, the Marquess' agent in England during his absence, in hopes that Rafe will sign paperwork to dissolve the betrothal. Although Rafe has desired Clio since childhood and would personally love for her to be a free woman, his loyalty to his brother prevents him from signing the papers and stealing his brother's bride. He is already wracked with guilt over the death of their father, who never approved of Rafe and his rebellious ways (most notably boxing, which at that time was not only disreputable but actually illegal). Rafe doesn't intend to be responsible for the loss of Piers' bride as well, so he sets off to Clio's castle to try to plan the perfect wedding, thinking that if he tempts her with all the luxuries of a society wedding, she'll be so caught up in the fantasy that she'll forget her desire to cancel the betrothal.

The best part of this story is how funny it is: Clio and Rafe have terrific chemistry, witty banter, and Rafe's trainer, Bruiser, is posing as a posh wedding planner to great comic effect. There is a scene involving tasting wedding cakes which is laugh out loud funny. Balanced with the humor is just the right amount of angst: Clio and Rafe have in common the fact that they've been rejected by those who should have loved them best -- Clio by her mother (and her would-be husband), Rafe by his father. Additionally, the tension between Rafe's sincere loyalty to his absent brother and his increasingly-inescapable attraction to Clio provides a satisfying and believable emotional conflict.

The parts of this book that annoyed me were actually supposed to: Clio's sister, in the guise of helping her have the perfect wedding day, fat-shames Clio relentlessly. Clio stood up for herself (and Rafe as well), and the sister got an appropriately satisfying set-down, but still these scenes set my teeth on edge. I found the conclusion a little too convenient, but not so much so that I couldn't willingly suspend disbelief for the sake of the story.