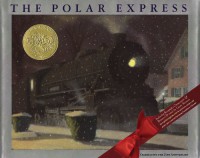 When The Polar Express first came out in 1985, I was already nine years old. I no longer believed in Santa, though I kept up the pretense for the benefit of my younger siblings. I remember reading this book to my little brother, who was then about two. He enjoyed it, but back then it didn't do much for me.

Now, my own sons are four and almost-two, and they are obsessed with trains and adventure and they still very much believe in Santa and the magic of Christmas, and this book has become an overnight favorite. My four-year-old asks me to read it over and over, and wants to talk about it several times a day. He is so obsessed, in fact, that I'm a little afraid he might wander outside alone in the middle of the night in search of his own imaginary Polar Express ride.

The illustrations are beautiful, and the story definitely captures my boys' imagination. I'm not sure if it would hold the same appeal for girls. I'm not sure why the protagonist's little sister wasn't included on the trip (and it bothers me that she wasn't), and I'm not sure what makes the protagonist so special that he was chosen among all the children on the train to receive the first gift of Christmas (white male privilege?). But that's me bringing my own feminist baggage to what is otherwise a lovely holiday story, and I try not to lay all that on my little boys--at least not at this stage of their lives.