Audiobook Review: As You Wish 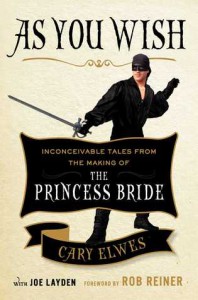 I really, really enjoyed Cary Elwes' memoir of the making of The Princess Bride, and I'm so glad I got the audiobook rather than a print version, because so many of the cast and crew contributed to the memoir and came back to read their own contributions, so listening to the book was a richer experience than I imagine reading it would be. I have been a huge fan of The Princess Bride since my childhood, but this book was full of fascinating stories I did not know--such as in the scene above the ravine, just before Buttercup pushes the Man in Black down the hill, Westley is walking funny because he has a broken toe, and the scene where Count Rugen hits Westley over the head with his sword after they leave the Fire Swamp, he really did accidentally knock him out. After I finished the book, I watched the movie again with my young son, and knowing the backstory almost made the movie new again (after probably some 40 viewings over the past 27 years).

Highly recommended for all fans of this classic film!