Uneven, but well worth reading even 50 years later.... 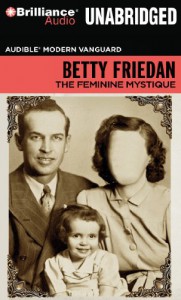 I have such a hard time reviewing audiobooks, for (at least) two reasons: 1) it takes me a lot longer to finish them than it would if I were reading and so my memory of the earlier parts of the book is not as clear when it comes time to write a review, and 2) I listen to audiobooks while driving, so I can't stop to make notes or highlight or bookmark sections I want to remember for later, so when it comes time for a review, I don't have much to say. This review, then, is just a broad sketch of my general impressions.

I've been meaning to read this book for twenty years, since my own days as a Smith student (Betty Friedan is also a Smithie), but I never got around to it until Audible made it a Daily Deal sometime this summer. Parts of it were very dated, as you'd expect, but most of it was still extremely relevant.

I don't know about the choice of Parker Posey as a narrator. She's a sort of high brow, intellectually superior, privileged white woman, and she speaks with a subtle but unmistakable undertone of Snark. This makes her very like Friedan, actually, but I think the message would be more accessible to a wider audience without the Snark. That's probably true of Friedan's writing, too.

I really enjoyed the introductory essays by Anna Quindlen and the 1997 foreword by Friedan. The 1997 reflection was fascinating, both in what it told of Friedan's reflection on her own work over time, but also my own sense--having missed the 1950s and 60s (when the Mystique was at its peak) but having come of age in the late 1990s and lived to the present--that feminism has lost ground since Friedan's 1997 essay. Friedan talks about the GOP's last desperate efforts to strike down abortion, for example, but the intervening years have seen those efforts become more successful and less desperate, alas.

I also liked the middle sections where Friedan eviscerated functional anthropology and Freudian theories used to keep women homebound and uneducated, though I found it ironic and unfortunate that, a few chapters later, Friedan bought into those same disqualified Freudian notions without question when she suggested that homosexuality was one of the regrettable side effects of the Mystique, because frustrated mothers can't help but twist and pervert their sons into homos. A product of her time, sure, but interesting that Friedan could be so skeptical of Freudian thought when comes to women and so blind when it comes to another marginalized group she didn't understand.

I kind of turned off in the later chapters about the psychological damage that frustrated mothers caused to themselves and to their children, probably because I don't put a whole lot of stock into psychology in general.

Still, it's an important book if you're at all interested in feminism or women's studies, and I'm glad to have closed this gap in my education.