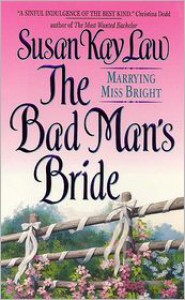 This was recommended to me by a Goodreads friend, for reasons I can't remember and which were not apparent from the story itself. It employs two different "Outsider" tropes: the heroine, Anthea, is a fish out of water as the new schoolteacher on the Kansas frontier, freshly arrived from a more civilized life in Philadelphia, while the hero, Gabriel, has been the town outcast since his birth out-of-wedlock. Gabriel's reputation is further tarnished when he takes the orphaned daughter of the town's whore under his wing, and everyone assumes that he is her father.

I liked the story well enough, though it wasn't especially original. Parts of it reminded me, fondly, of the Little House on the Prairie books I read (and reread and reread) as a girl. I found the main characters likable and relatable. However, much of the story was predictable, and none of the plot twists were especially shocking... though I'm not sure the author was aiming for shocking.

What really troubled me about this book, though, and brought it from a three-star "Meh" rating to a two-star "Nah" rating, is the story's weird, backwards, and kind of convoluted messages about sex. I checked the publication date of this book, thinking it might have been written right on the cusp of the Old Skool (rapey, alpha heroes) romances written in the 1980s and prior, and the more enlightened New School romances of more recent decades, but The Bad Man's Bride came out in 2001, which was later than I'd have guessed.

Anyway, the first thing that bothered me is that Gabriel held off sleeping with Anthea until all of a sudden he learned she was not a virgin, since she'd anticipated her wedding vows with a fiancé who threw her over when her father's death left her and her sisters destitute (which is why she's in Kansas teaching). Upon learning this, Gabriel throws all his good intentions out the window, and immediately sees Anthea as fair game, sexually speaking, though at that point he has no intention of marrying her. I didn't mind that Anthea wasn't a virgin, and I liked that she had her own sexual needs and wasn't afraid to go after what she wanted, but Gabriel could have been more honorable. This is a squick of mine: I really hate historical romances where the lovers become intimate without any intention or ability to marry, and it's not because I'm a prude--it's because in that historical context, a woman took such an enormous risk in giving up her purity and risking pregnancy, that it just isn't honorable for a man to accept that risk without intending marriage. And Gabriel, who has spent his whole life shunned and despised by the townsfolk for his bastardy, should have known that better than anyone.

The second thing that bothered me was a subplot involving the town banker, Philip, and his wife Cleo. Way back years before she and Philip married, Cleo had an affair with Gabriel, and she's been hung up on him ever since, to the detriment of her marriage. Toward the end of the book, there is a confrontation in which Cleo realizes that Gabriel doesn't return her regard. While she is still emotionally distraught over this, Philip hunts her down, finds her sobbing in a stable, and essentially rapes her. The way the scene is written, I had the sense that we readers were supposed to be uplifted by it, as if Philip is finally proving his manliness/worthiness by taking what is his (even though Cleo resists, says no, turns her face away from his kisses, tries to pull away, etc.), and when she ultimately responds with physiological arousal, we readers are supposed to rejoice as if this is a turning point in their troubled marriage, because Cleo's always been a cold fish up to that point. I was deeply troubled by the apparent acceptance of the rape culture myth that a woman can't/won't respond if she isn't secretly into sex, no matter how she may have otherwise expressed her lack of consent.

Obviously, that kind of soured the Happy Ever After for me.